When you enter the world of motovlogging. you’ll immediately realize that there’s a lot of gear is required. Therefore, it’s important to know which ones you should get.  So what are the best action cameras for motovlogging in 2022?

You’ll also see the countless hours of setting up your equipment, installing the microphones, sticking mounts to your helmet, etc. For this reason, buying a camera or any other piece of equipment isn’t as simple since the market offers so many different models.

Action cameras aren’t cheap due to their specs. Buying the first one you come across might be a bad idea, especially if you’re new to the world of motovlogging.

So, to make a purchase easier, let’s talk about the important stuff first. 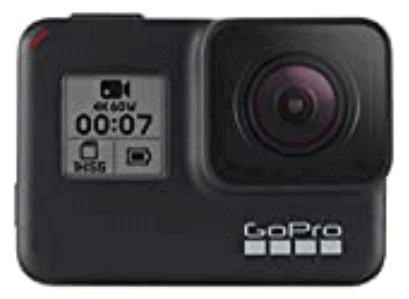 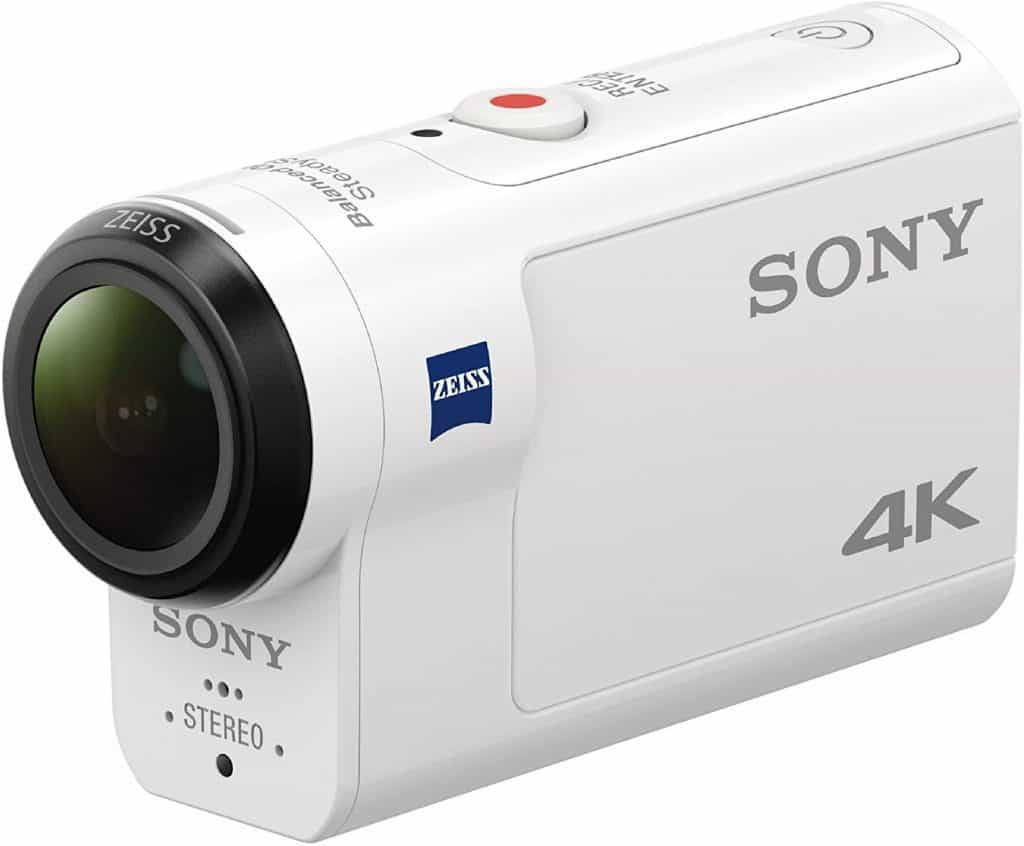 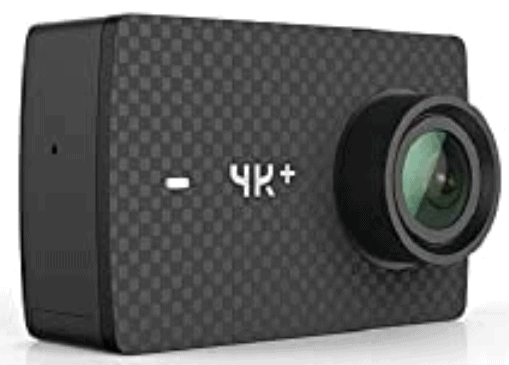 What To Look For In Action Cameras For Motovlogging

Video plays a significant role in your motovlogging, so you’ll need an excellent camera.

You want to avoid an honest rookie mistake of only looking for a device with the highest resolution. Rather than that, pay additional attention to other aspects:

The Importance Of Camera Mounts

Here are the cameras recommended for motovlogging based on the following key attributes:

The Top 5 Action Cameras For Motovlogging

First on the list is this camera is one of the most recommended action cameras for motovlogging. For those unfamiliar with a GoPro line of products, a GoPro is a small, handheld, waterproof camera designed for those into action sports.

They can be mounted or placed just about anywhere to get a perfect angle of your photo or footage. GoPro’s are capable of capturing videos, stills, photo bursts, nighttime, and underwater photography.

The Hero 7 Black, GoPro’s newest addition to its line of products, has tons of features and impressive capabilities. The design is pretty rugged and feels solid. This compact, robust design ensures waterproofing, allowing you to go as deep as 33ft, without special housing.

There is a good reason this appears first on our list for the best action camera for motovlogging.

A small plastic frame wraps around Hero 7 Black is provided as a package standard. It can be mounted to your helmet or your handlebar using adhesive.

The Hero 7 Black captures sharp 4K videos with up to 60 frames per second. A 1080p mode allows for a bigger framerate of up to 240fps if you’re interested in doing slow-motion videos.

The most significant feature of this little device is HyperSmooth, a form of video stabilization that GoPro claims are the same as using a gimbal.

Hero 7 offers handy voice controls that are especially useful for motovlogging since you’ll have your camera mounted on a helmet, handlebars, or chest.

GoPro Hero 7 Black is, without doubt, one of the best action cameras available.

Pros Of The GoPro Hero 7 Black

Cons Of The GoPro Hero 7 Black

Coming in at number 2 is the GoPro Hero 6 Black. When this model first appeared on the market, everyone thought that it couldn’t be beaten. And there was a reason for that. This is the older brother to GoPro’s Hero 7 Black, with more minor up-to-date features but still an incredible footage quality.

In terms of physical design, it hasn’t changed much from Hero 5 Black, a tradition that Hero 7 Black continued. The camera is as discreet as ever, compact, and feels extremely durable. The plastic frame the Hero 6 Black comes with allows for all sorts of camera mounts.

The Hero 6 Black introduced us with a Wake-On-Voice feature. Turning the device off using your voice would send it onto a low-power listening mode for eight hours. This enables you to turn the device on with a “GoPro turn on” voice command. If you leave it off longer than eight hours, Hero 6 Black shuts down completely.

The image stabilization has been improved, but it doesn’t eliminate the need for GoPro Karma Grip since software stabilization has a limited correction. Another improvement made was to low-light performance, with improved dynamic range thanks to the new G1 processor.

Pros Of The GoPro Hero 6

Cons Of The GoPro Hero 6

Number three on our list is the Sony FDR-X3000 due in large part to its image stabilization features.

The lens and sensor are joined and move together, reducing the effects of internal camera shakes. It’s much more useful than regular optical image stabilization. This, combined with several other features, makes the FDR-X3000 a worthy competitor to the GoPro cameras.

The design of FDR-X3000 remains consistent with Sony’s previous action cameras, which have always resembled tiny camcorders. This design makes it ergonomic for hand-holding but also great for side-mounting on your helmet.

The device is available in a glossy white finish, weighing only four oz. with the battery included. The camera chassis is IPX4 rated, meaning it’s splash-proof. If you want to use the camera underwater, you’ll need to pop it into the waterproof case. The case also offers dust-proofing.

The FDR-X3000 comes equipped with a Zeiss Tessar multi-coated lens, with improvements to its performance. For example, there is significantly less barrel distortion, meaning you get substantially more minor of the fish-eye effect.

Another great feature is the Live-View Remote Control, which replicates the controls on the camera body. Sony released several compatible accessories to attach the remote to. The FDR-X3000 offers 60 minutes battery life if you use 4K resolution and well over 2 hours if you switch to 1080p. The batteries are replaceable, so you can always carry a spare with your motovlogging camera.

Coming in fourth is the Yi 4K+, a device of a refined and elegant design, which is quite minimalist.

The Yi 4K+ Action Camera is a GoPro 6 Black rival that is far more affordable. Compared to the original model, the Yi 4K Action Camera, this upgraded version offers much smoother footage, even when shooting at the highest resolution.

The Yi 4K+ is a device of a refined and elegant design, which is quite minimalist. There is only a single multifunctioning button on top, coupled with a beautiful hi-res touchscreen display. The display allows you to easily change settings such as camera resolution, framerates, modes, focal points, etc.

The overall weight of the device is 3.2 oz, which is lighter than its rival but lacks the rival’s waterproof capabilities. However, separately sold plastic housing enables waterproofing.

The Yi 4K+ does 4K at 60fps. However, the Ultra 4 – the most detailed setting – unfortunately top out at 30fps. At 60fps, the footage is impressively sharp and well saturated but lacks image stabilization, which only applies to 4K/30fps.

Yi 4K+ is an alternative to the GoPro line, offering similar features. It also provides reliable image stabilization, an excellent touch screen, 4K/60fps, and voice controls.  We believe this is the best budget action camera for motovlogging.

Pros Of The Yi 4K

Cons Of The Yi 4K

And at number 5, The Rylo 360 records spherical video, just like any other 360 camera. In addition, it features identical cameras located opposite of each other on both sides of the device.

This camera is for those looking to expand their view during adrenaline-inducing activities. It’s a small and portable camera, which benefits from straightforward design and an easy-to-use app.

The frame is made from aluminum, adding to the premium feel of the product, which fits into the palm of your hand. However, since the device isn’t ruggedized or waterproof, Rylo offers an optional Adventure Case to protect from water and dust.

Rylo’s secret lies in the ability to control the device within its app to output professional-looking footage, capturing everything around it. The twin sensors capture 5.8K spherical video and 6k spherical pictures. Due to the overlapping field of view, the image stabilization is incredibly functional.

Its video quality is exceptional in well-lit conditions. The footage also looks excellent, offering plenty of detail. However, in situations with unequal lighting, the rate drops significantly.

Other than the lack of a microphone, Rylo offers a great platform with excellent features.

What Is The Best Action Camera For Motovlogging?

Well, I would have to say it’s the GoPro Hero 7 Black or the Sony FDRX3000 action camera. These two hold the gold standard for action cameras. If I had to choose one, I’d say it depends on how you’re going to use it.

For example, long term, long videos, I would suggest the Sony FDRx3000 because the battery life is better, and it also is MUCH easier to change the batteries. If you want something for shorter duration clips with better stabilization, something like the GoPro Hero 7 Black is the best.

GoPro’s stabilization is undoubtedly the best, but the Sony is a very good option.

I find it hard to tell the difference between the GoPro and Sony stabilization compared to most cases. That being said, when you’re walking or running, it’s easy to see that the GoPros digital stabilization is better.

Once you start recording, you will soon realize you need a few more pieces of gear to get the recording just right.  Here are two must-have accessories that will get you sorted.

link to The Best Laptop For Cryptocurrency Trading

With crypto markets going up, down, then sideways, it pays to have the best laptop for cryptocurrency trading.  The market may change, but your laptop should be rock solid.  It needs to be robust...

There are tons of laptops in the gadget market. However, many of the best laptops often come as products of high-profile companies, including HP, Acer, and Apple. And while it is clear that you can...